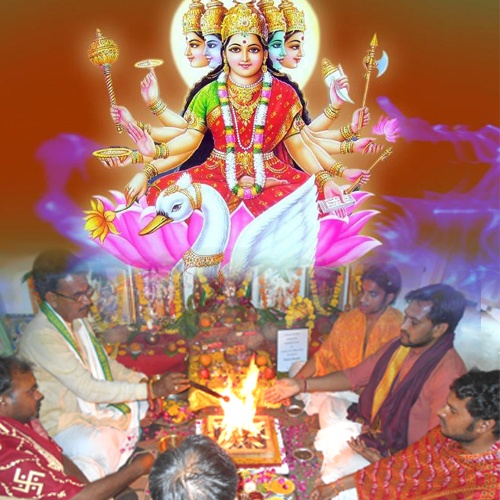 Information about Online Gayatri Mantra Japa & Puja
Goddess Gayatri is considered the mother of all the four Vedas. According to Ancient Hindu Sacred Texts, " The Gayatri is Brahma, Gayatri is Vishnu, Gayatri is Shiva, Gayatri is Vedas ". Later on, this Mantra came to be personified as a Goddess. She is believed to have five heads and is usually seated within a lotus. The four heads of Gayatri represents four Vedas and the fifth head represents Almighty God. By worshipping Goddess Gayatri, the sins and the inauspicious results of the bad deeds of many births are eliminated and knowledge of divine is generated. Gayatri proclaims the fundamental principle of Vedas that a man can get, realization of God in his life through his own efforts without the intervention of any other Spiritual power.

"Sun" is worshipped through the Mantra of Gayatri. Goddess Gayatri through her blessings, brings the blessings of Sun, eradicates the sins of past life, sharpens intelligence, enlightens you and enables you to possess divine qualities. It leads a person to the right path, blesses him with peace, happiness and contentment.

The Gayatri Mantra is the universal prayer enshrined in the Vedas, the most ancient Scriptures of Man. One have to recite the Mantra as follows :

The Gayatri Mantra can be translated as :

OM - Para Brahman
BHUR - Bhu Loka (Physical Plane) - This refers to the five elements this body is made up of
BHUVA - Bhuva Loka (Middle Plane) - This refers to the power in man which animates the body. This is actually the Prana Sakthi
SVAHA - Swarga Loka (Heaven)TAT - That, this refers to God, or Paramatma
SAVITUR - That from which all is born
VARENYAM - Fit to be worshipped
BHARGO - The Radiance, the Spiritual Effulgence, the light that bestows wisdom.
DEVASYA - Divine Reality
DHEEMAHI - We Meditate
DHI YO - Buddhi, Intellect
YO - Which
NAH - Our
PRACHODAYAT - Enlighten

Please note that a "Prasadam" of Gayatri Mantra Japa & Puja is sent to the client via couriers. This prasadam includes the following items that have been energized during the puja :

Request you to provide us the following information for the Puja in the respective fields given above along with the main image :