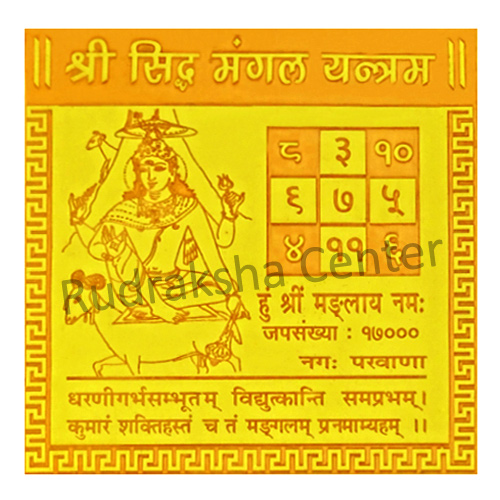 MANGAL YANTRA - Protection from Accidents, Anger and Quick recovery from Surgery & Illness, For Delayed Marriage and Mangal Dosha of Horoscope
Mangal Yantra should be installed and worshipped to appease planet Mars. Mars is the planet of sheer raw energy which powers our actions. Mars represents our actions without any consideration of any reason behind them where as actions & energy of the planet Sun are controlled by reasoning. The planet Mars represents our Body Energy, Movement, Earth, Courage, Brothers, Sisters, War, Fire Arms, all inflammable products, Residential properties & Surgeons. It also represents Security services, Military, Police force, Soldiers and Army.

The planet Mars is the Lord of zodiac sign Aries and Scorpion. It is EXALTED in the sign Capricorn and is DEBILITATED in the sign Cancer. The planet Mars is also one of the most important factor for a successful Marital life. Whenever, planet Mars is placed in the 1st, 4th, 7th, 8th and 12th house of a person's horoscope, he is said to be a Mangalik person. A person with a weak or malefic Mars suffers from Blood disorders as well as Digestive problems, Accidents, Operations, Boils, Piles, High & Low Blood Pressure, Anemia & Injuries by fire arms. A conjunction of planet Mars with planet Rahu or Sun forms a bad Yoga known as Angarak Yoga. The presence of planet Mars in the 5th house is not considered good from progeny point of view and it can lead to miscarriage or abortions especially so if the planet Mars is being aspected by any other malefic planet. The presence of planet Mars in the 8th house is indicative of Accidents/Surgeries especially so if the Mars is in conjunction with any other malefic planet like Saturn, Rahu, Ketu, Sun.
Size of Yantra
Copper & Golden plated Mangal Yantra :
This Yantra is made on Copper plate with partial Golden plating. The sizes available are 2 x 2 inches & 3 x 3 inches. You may select the size by clicking on the Dropdown option provided above along with the main image.
Energization of Mangal Yantra
Please note that as such, the Yantra sent to our clients are already energized by our Guruji according to rituals required as per ancient vedic texts and therefore it may be directly placed in the Puja Room or Hand Bag / Wallet or any other pious place.

However, if the client wishes then additionally He / She may do the following :
On Tuesday morning, after having bath, wash the Yantra with clean water and wipe it clean with a soft piece of cloth then install it with full faith at your worshipping place. Light a lamp and kindle some incense sticks.
Beej Mantra
Om Kraang Kreeng Kraung Sah Bhomay Namah
Presiding Deity
Planet Mars
Day to Install
Tuesday
Direction for placing this Yantra
South
Please Note
The Design of the yantra may differ slightly from the image shown above, as we keep on upgrading our yantras under the guidance of our learned gurus to make yantras more & more effective.