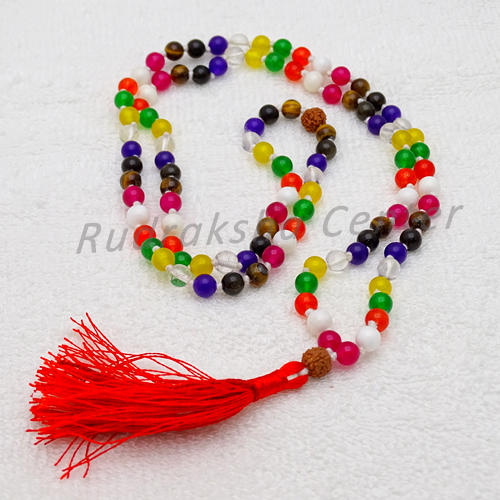 This mala is also effective for increasing the power of weak planets and it also protects a person from short time Negative transits of planets. This Mala should also be worn by a person who do not have a Horoscope due to lack of exact Birth time or when the correctness of the horoscope is doubtful. One can also use this mala to chant the mantras. Moreover, this Navgrah Mala has two Rudraksha beads ( one in the center and another as Meru bead below tassel ) which further enhances the power of Navgraha Mala.

Please note that this mala is Energized ( A Pran - Pratistha Puja is performed by our Guruji ) before being sent to our clients so that they can get a maximum benefit from it.

This Navgraha mala can be worn by both men & women irrespective of any age.

This mala should be worn for the 1st time from any Thursday morning after taking bath and reciting the following Beej Mantra for 11 times :