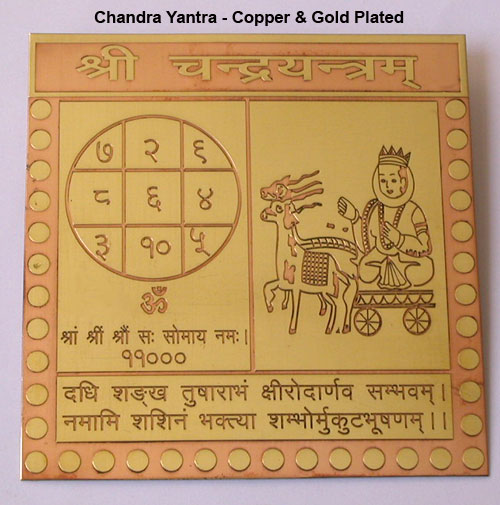 Chandra Yantra - For Will Power, Good Relations, Removal of Negativity, Depression, Increment in Intuition Power
Chandra Yantra should be installed and worshipped to appease planet Moon as well as to pacify it if it is giving negative effects. The Planet Moon is one of the most important planets in any Horoscope. Moon is considered as a planet but in fact, Moon is a satellite of planet Earth and it revolves around Earth completing one revolution in around 27 days. Astrologically, it is regarded as Queen in the planets (Sun is regarded as King). The planet Moon controls our Emotions, Will Power, Wealth, Health as well as all our thoughts. A person having a strong Moon ( Moon in its own Sign - Cancer, Moon in its exaltation sign Taurus or Moon being aspected by naturally benefic planets like Jupiter ) is strong in regards to his Will Power and Decisions & he is always a Positive thinker and never falls prey to negative states of mind like Depression. A person with a weak Moon can suffer from diseases of chest, lung infections, tuberculosis, blood related problems, mental problems as well as depression and diseases related to digestive system like diarrhea, dysentery, etc.

On the other hand, a person having an afflicted Moon ( Moon in enemy sign like Capricorn, Aquarius , Moon in its Debilitation sign Scorpion, Moon with malefic planets like Saturn or Rahu ) in his horoscope is always prone to harbor Negative Thoughts in his Mind, he is unable to adjust even with his close friends and family members and is never able to achieve success in his life which is full of miseries due to his own deeds resulting out of a Weak/ Afflicted Moon. Moon is a female planet and it represents our Emotions, Happiness, Wife, Lover, Silver, Pearl, White color, Travels, as well as our Will power. Moon also controls the white portion of our blood.
Size of Yantra
Copper & Golden plated Chandra Yantra : This Yantra is made on Copper plate with partial Golden plating. The sizes available are 2 x 2 inches & 3 x 3 inches. You may select the size by clicking on the Dropdown provided along with the main image.
Energization of Chandra Yantra
Please note that as such, the Yantra sent to our clients are already energized by our Guruji according to rituals required as per ancient vedic texts and therefore it may be directly placed in the Puja Room or any other pious place.

However, if the client wishes then additionally He / She may do the following :
On Monday morning, after having bath, wash the Yantra with clean water and wipe it clean with a soft piece of cloth then install it with full faith at your worshipping place. Light a lamp and kindle some incense sticks.
Beej Mantra
Om Shraang Shreeng Shraung Sah Chandramase Namah
Presiding Deity
Planet Moon
Day to Install
Monday
Direction for placing this Yantra
North East
Please Note
The Design of the yantra may differ slightly from the image shown above, as we keep on upgrading our yantras under the guidance of our learned gurus to make yantras more & more effective.